The village of Cheddar in Somerset is home to Britain’s biggest gorge towering up to 450ft creating a dramatic landscape of cliffs and stalactite caverns below with the famous Gough’s and Cox’s caves carved out by million year old Ice Age riverbeds.

The gorge is a world renowned beauty spot and a National Nature Reserve, and the village is famous for its fantastic cheese.

The village can become packed in summer as there is a lot to do so, I recommend coming here off season, especially if you want to visit the caves, some things will be closed and you may want to save the 3 mile gorge walk for a warmer day. If you are feeling really adventurous try adventure caving or rock climbing. 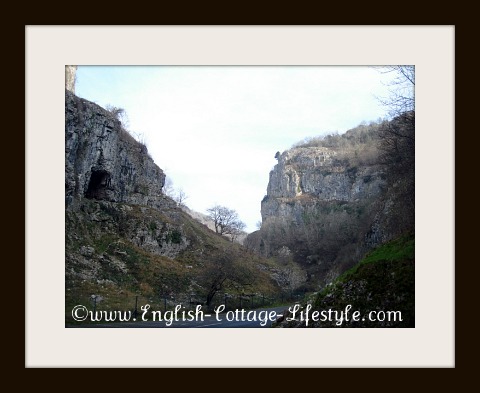 You will need the ’Caves and Gorge Explorer’ ticket which gives you access to 7 attractions (purchase tickets at the entrance to Gough’s cave). The ticket allows you to visit Gough’s cave, Cox’s cave and the crystal quest, the museum of prehistory, and if you are feeling fit; walk the 274 steps to the cliff top lookout tower and the 3 mile Cliff Top Gorge Walk.

I visited in January and it was cold and windy, as I entered Gough’s cave it felt warmer than outside, and I shared the cave with my husband and only ten or so other visitors, who were all at different stages of the tour, I practically had the cave to myself so I could hear running water and every sound, and the audio tour when I listened to it, which all added to the experience. 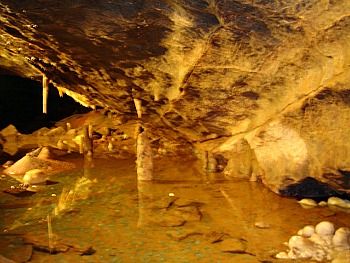 Imagine how the first explorers felt when they lit their candles and the stalagmite and stalactite formations became illuminated.

The stone 'waterfall' in Gough's cave 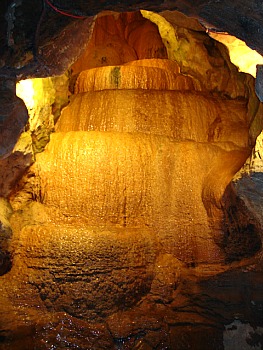 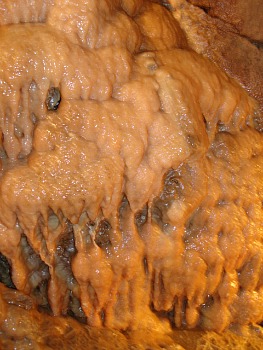 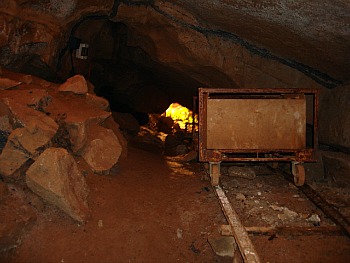 Richard Cox Gough and his uncle George Cox were the 19th century explorers who discovered the underground caverns with the underground river still chewing its way through it.

The walls are streaked with the rich colours of the minerals running through them and the river has been the artist of many sculptural shapes and waterfalls that have taken thousands of years to create.

Richard Cox Gough was inspired by his uncle’s discoveries and continued to explore the caves they had discovered finding many more. He also realised money could be made, as the caves were an attraction, and he promoted them as such.

His sons found the ancient remains of the Cheddar Man and you can find out more about him in the museum of Prehistory which is just across the road from Gough’s cave.

“It is the best cheese that England affords, if not, that the whole world affords.”

If the caves aren’t reason enough to visit then the local cheese will tempt you! If you love cheese then you simply must pop into the Cheddar Gorge Cheese Company and sample their wares at the taster bar.

The village has been making cheese for centuries with the earliest references dating back to 1170 it was the local cheese makers in the area who discovered and perfected their own method of cheese making creating an authentic Cheddar cheese.

Cheese making was invented as a great way to use up surplus milk back in the eleven hundreds and the local caves in the gorge made the perfect fridge, as you can see in the photo below. 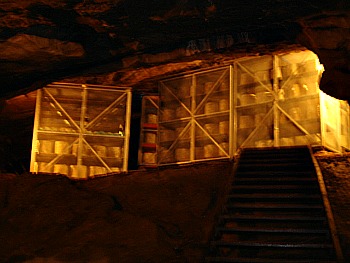 The Cheddar George Cheese Company hand make the authentic local cheese and visitors can watch the 7 hour process in different stages throughout the day from a viewing area.

Visit the shop and try the cave matured cheese after seeing the truckles maturing in Gough’s cave. Buy some and take some home its wonderful in quiche or just to eat with a ploughman’s lunch (traditionally a thick slice of bread, a lump of cheese and a pickled onion). They have a large courtyard which is great for picnics. 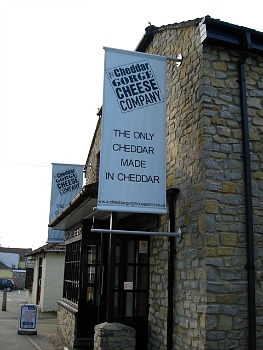 If you’re hungry there’s good food in the village at the Riverside Inn; their dishes are prepared using local produce, they also have a lovely pub if you fancy a pint of local beer, ale or cider.

The banner below will take you to holiday cottages in the South West, just put in the search box 'Somerset' for more cottages

Back To Home Page